When looking for a concealed carry pistol, the choice often comes down to two major contenders that are very similar, yet have different enough characteristics to distinguish one from the other. In this case, let’s compare the Glock 43 vs the Glock 43X, a pair of sub compact single stack pistols from the same manufacturer.

Glock pistols have a well-deserved reputation for quality, accuracy, and reliability. They are well known for their high ammo capacity, double stack magazines, and polymer frames. Single stack concealed carry pistols in 9mm were not exactly their forte until April 14, 2015, when they released the Glock 43.

The G43 came on the heels of a slightly smaller single stack in 380 ACP called the G42. The primary competition at the time for the G43 was the S&W M&P Shield series of handguns. The Shield was designed as a small carry pistol and Glock realized this was a share of the market they needed to go after.

However, some G43 shooters had complaints about Glock’s new carry pistol. Namely they found the grip too small. For some it was too narrow and for others the grip length was simply too short to shoot accurately and comfortably. The simple answer might be the addition of a magazine extension that could optionally add an extra round in the magazine’s capacity, however, a longer grip was really what was needed.

Glock answered the call by producing the G43X. A slightly larger, single stack concealed carry pistol with a longer grip and a 10-round magazine capacity as opposed to the 6 found in the G43. So which one is better? Learn more about the 43 and the 43X below.

The names of these two pistols are so similar that they can be a little confusing to someone new to shooting or new to the Glock family of firearms. However, they are different enough with their own unique set of advantages that a more detailed comparison is warranted.

While on the surface the two subcompact Glock pistols seem similar, the difference between the 43’s and 43X’s are enough that from a naming convention, Glock might have been better off going with a different number in the nomenclature as opposed to adding an X.

As mentioned earlier, the G43 is a compact concealed carry pistol with a single stack magazine. One could really call it a sub-compact Glock as its footprint is extremely small. The barrel length is 3.41 inches, and the pistol is about 6.26-inches long. The width is 1.08 inches, and the height of this pistol is 4.25 inches. It holds 6-rounds in the factory magazine and weighs 20.64 ounces.

In contrast, the slightly larger Glock 43X shares the same length barrel but has a slightly longer overall length of 6.05 inches. It has an increased slide length and a ¾ of an inch taller length at 5.04 inches, due to the 10-round magazine needing a slightly longer grip frame. It tips the scales at 23.07 ounces. The main noticeable difference is the slide has an nPVD coating giving it a silver finish as opposed to the flat black finish of the G43. However, Glock has recently released the 43X with a black colored slide as well.

Both pistols lack an accessory rail, which has pretty much been a mainstay on all Glock models for the past 20 or so years. This may have been done to increase the concealability factor of each pistol. However, certain companies like Streamlight offer weapon mounted visible white lights and visible lasers which envelope the trigger guard. These allow the shooter the option of adding a compact and robust weapon mounted light.

A newer version of the 43X includes an optical mounting plate as an upgrade. No such option exists for the G43 currently.

The only other major difference between the two pistols is that the 43X slide is milled with forward cocking serrations, whereas the G43 only has the rear cocking serrations milled into the slide. This is a good option for shooters who may lack the hand strength to rack a slide while holding the rear serrations only. It is not a bad idea for performing press checks, especially during a tactical pistol training class.

A byproduct of the larger G43X is increased factory magazine capacity. In this case, it is 10 rounds as opposed to the 6 rounds capacity of the G43. It should be noted that magazines between the G43 and the G43X do not interchange. Therefore, when you go looking for spare magazines for either pistol, double check to ensure that you are getting the correct magazine.

If you have larger hands, the additional length of the G43X’s grip with its longer magazine and increased capacity might make sense.

Subcompact pistols like the G43 and G43X are not known to be tack drivers due to their short sight radius, compact ergonomics, and relatively light weight. However, from reading reviews online or in various gun magazines, these two pistols are accurate enough depending upon ammunition and the shooter’s skill level.

The average degree of accuracy for both the G43 and G43X seems to be within 2 to 3 inches out to 50 feet. This is something that can be improved upon by incorporating aftermarket triggers or even a micro red dot sight like the Shield Systems sight that is small enough to ride unobtrusively on the slides of these compact pistols. Upgrade your Glock today by shopping our aftermarket triggers and other upgrades!

Depending upon the shooter, the differences in accuracy can be miniscule to significant. A shooter with particularly large hands might find the 43X, with its slightly wider and longer grip, more accurate than a 43. A shooter with much smaller hands might find the opposite to be true. In reality, most shooters probably won’t notice a difference regarding accuracy. With trial and error, it might come down to borrowing a friend’s pistol for a range session or frequenting an indoor shooting range with a well-stocked rental section to determine the best fit for you.

Smaller guns like this are often unfairly criticized and lumped into the “carry often; shoot infrequently” category. While carrying often is never a bad thing; shooting infrequently can be. Both pistols are reliable and reasonably accurate. The 43X offers a better hold on the gun for most shooters, and unless the shooter has particularly small hands it should win in the accuracy department.

There seems to be no major issues from a performance or reliability standpoint with either of these micro Glocks. Like all Glock pistols, there is a very even-handed process of engineering and testing before their release to market. Each one performs at the desired level before they make it to the public arena.

Which Glock Should I Buy?

With all this information in mind and without either subcompact Glocks in your hands; the 43X might seem more attractive. A more comfortable grip frame, increased magazine capacity, and a silver-colored slide seem like extremely good developments and the makings of a better pistol, right?

That’s when you need to step away from the written word and the nice pictures and physically pick up each one to see how they handle and feel.

Where the G43 has a distinct advantage over its younger brother the 43X is that it is just a little bit more concealable. Reading the comparison of the measurements above may not reveal this, but trying to carry one or the other in an appendix holster or an ankle holster will certainly reveal the difference.

Notoriously, the hardest part of any firearm to conceal is the grip. This may not be as wide or as long as the grip frame found on a 10mm G20 or G40, yet sometimes mere inches or fractions of an inch can make a huge difference between a concealed and a “printing” handgun. Likewise, a G43 might be more appropriate for ankle carry.

It comes down to how much more comfortable you are as a shooter with either the G43 or the G43X. Hand size can play a role here, as well as concealability. While either pistol can be carried openly as opposed to concealed, an open carry shooter may want to look at the larger and more easily shootable models G19 or G17 as opposed to these subcompact Glocks. 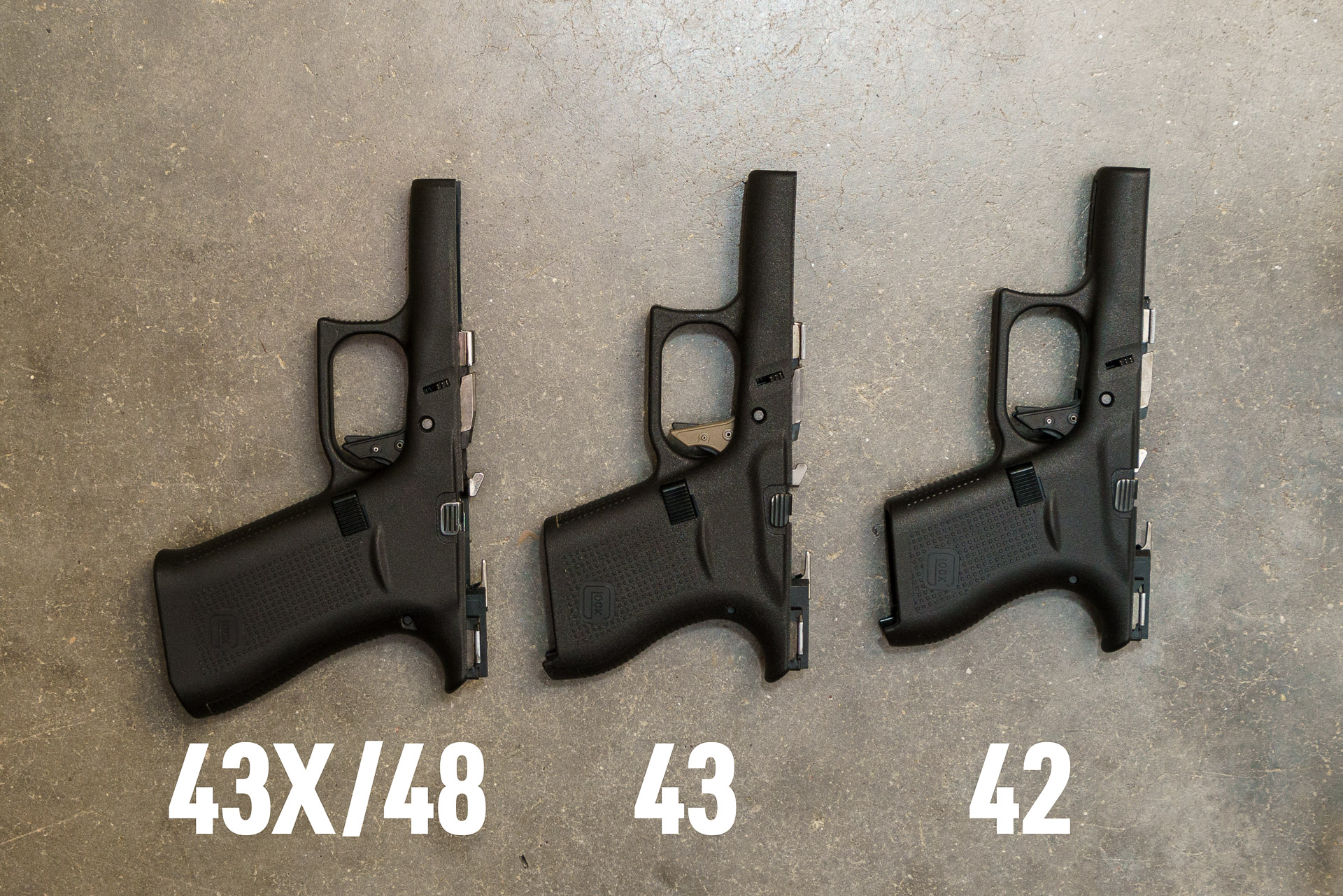 With all things being equal, it may come down to aesthetics. Some may prefer the silver finish of the 43X over the black finish of the G43. For some shooters, the opposite might be the case.

In the end it is up to you. A slightly larger size and increased magazine capacity may be more appealing to some shooters whereas others will appreciate the smaller size and weight of the G43. The bottom line is that you won’t go wrong with either of these two pistols. It all comes down to personal preference.