Glocks are not complex guns, but they are complicated. From an engineering standpoint, Glocks are a brilliant design. Excluding the magazine, there are only 28 parts in most Glock models. This is far less than most, if not all of their competitors. Despite their positives, many people feel there are some basic drawbacks to the Glock platform as a whole. Let’s looks at the two most commonly perceived drawbacks and what you can do about them.

Let's start with the sights. Glock sights are usually the first thing that get tossed and replaced. We all know the stock ones are junk, but don’t worry; Overwatch Precision has produced our own high-quality sight called the Have Blue to get you through your day. Other than replacing your sight for aftermarket ones, there is not much more to do with the sights. It’s a simple replace and swap.

The second item to be replaced is the trigger. While the stock Glock trigger is not bad, it does leave a lot to be desired. Here’s the thing though; as simple as Glocks are, 90% of the people out there do not understand how the internals of a Glock actually work. Of course, if you're just going to the range, you may not need to have an understanding of how Glocks work internally, but if you're going to start messing with the Glock mojo, you absolutely need to know what you're doing and how it's going to affect the firearm and the performance. Despite folklore there actually is real engineering that goes into these firearms despite what  some may think.

For the uninitiated, the common belief is that there is only one way to make a Glock trigger feel subjectively better, and that is to remove pre-travel. The reality is different, but we all know how this goes. You’ve unknowingly reached your personal Dunning-Kruger1level of proficiency and you decide it is time to start changing the internals to get that 1911 break you’ve only read about. You know; a spring here, a connector there, a trigger with zero pre-travel. Before you know it, that G19 that you’ve personally customized fails during that $400-dollar weekend class you’re in and you look like the class dunce.

Instead of acknowledging your shortcomings with regard to your knowledge of how Glocks function, you proceed to blame the parts that you’ve put in the gun, not the interaction between those parts (spring rates, what are those?). It’s not entirely your fault though. The simplicity of the Glock platform is what has led to the problem of unqualified individuals with poor foundational knowledge working on their pistols. That’s just one reason why Glock recommends to have a gunsmith or certified Glock armorer install your parts.

Now let us briefly examine how a Glock pistol functions when it’s time to get down with the Terries. As you pull the trigger, your finger depresses the trigger safety while the vertical extension of the trigger bar simultaneously pushes the firing pin safety closed. As this occurs, the cruciform moves off of the drop safety shelf and is cammed downward by the connector, thereby forcing the sear to release the striker. What does that all mean? 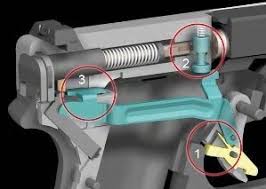 These safeties are passive, automatic, and independent in nature. The passive and automatic simply means they deactivate automatically as the shooter starts their trigger press with no active thought needed to disengage them. The independent refers to the safeties acting independently of each other, whereas it is possible to deactivate or bypass one safety without deactivating the other two. 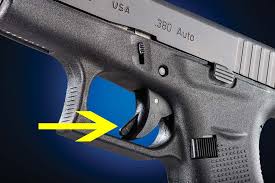 The trigger safety’s actual purpose is to prevent momentum from actuating the trigger if the gun is dropped or jarred with significant force. The distance of the safety to the frame has been calculated so that if the trigger were to move rearward, the trigger safety would contact the frame before the cruciform was clear of the drop safety shelf. 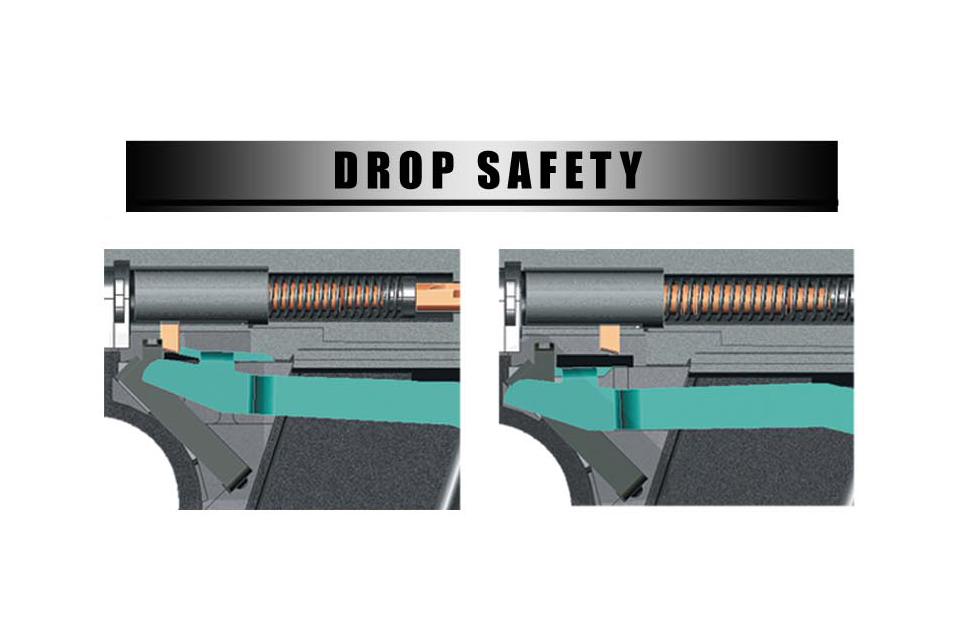 The timing of all three of these safeties is critical to the correct functioning and inherit safety of the Glock Safe Action System. Most shooters believe eliminating pre-travel is what makes a Glock trigger feel better. This is partially correct as removing pre-travel will give a shorter pull. But, will the actual “feeling” change? Probably not. It is important to realize that when you remove pre-travel, you also mechanically stage the trigger farther rearward. This causes the firing pin safety to be partially deactivated and moves the cruciform dangerously close to the edge of the drop safety shelf.

As mentioned earlier, as pre-travel is removed from the system, the cruciform gets closer to the edge of the drop safety shelf. At this point real engineering needs to be performed to calculate the correct distance between the inside of the trigger guard and the distance to the safety. This includes calculating the correct spring rate for the trigger safety spring.

Can an aftermarket trigger be designed to mitigate these potential pitfalls? Of course. Here at Overwatch Precision, our staff includes full-time mechanical engineers that design our products to be safe and reliable above all other metrics. Our Tac and Falx trigger have all been designed to eliminate as much pre-travel as possible while still maintaining all of of the factory safety parameters. This is important to know as there are, at my last count, approximately 35 other companies making aftermarket Glock triggers. Some of them are absolute trash, while others are quite good and safe.

Ultimately, low parts count, low parts cost, availability of parts, and ease of breakdown are what make Glock pistols a popular choice for both civilians and law enforcement alike. Overwatch triggers can provide the end user with more performance and control over their shooting while maintaining a level of safety that is not only expected but required. Our triggers are used and trusted by law enforcement nationwide and combined with our lifetime warranty, you can feel confident in our products to keep you safe.

DISCLAIMER: "GLOCK" is a federally registered trademark of Glock, Inc., and is one of many trademarks owned by Glock Inc. or Glock Ges.m.b.H. Neither Overwatch Tactical LLC, dba Overwatch Precision, nor this site is affiliated in any manner with, or otherwise endorsed by Glock, Inc., or Glock Ges.m.b.H. The use of "Glock" on this page is merely to advertise the sale of Glock pistols, parts, or components.

(1) Kruger, Justin; Dunning, David (1999). "Unskilled and Unaware of It: How Difficulties in Recognizing One's Own Incompetence Lead to Inflated Self-Assessments". Journal of Personality and Social Psychology. American Psychological Association. 77 (6): 1121–1134. PMID10626367